I actually read this second installment in Cassandra Clare’s The Mortal Instruments series over vacation a few weeks ago, and over this past weekend I read City of Glass…so hopefully I won’t mix them up in this review…

Also, as you know I’ve been posting sort of sporadically this summer, but I’ve also gotten pretty bad at checking in with my fellow bloggers. I love it when you visit The Urge to Write, and I love visiting your blogs as well, so I promise I will be by soon. 🙂

And now, on to the review! I am trying to keep these reviews as spoiler-free as possible, but if there’s just absolutely something I need to say that is a spoiler, I will warn you! (Although, if you haven’t read City of Bones yet, I would not continue reading this. Instead, check out my review of City of Bones here.) Please let me know what you thought of City of Ashes (CoA) in the comments – I would LOVE to discuss this series with you!

You can find CoA on Amazon here. 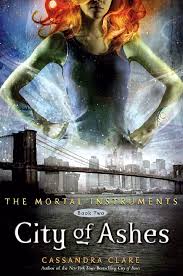 “Clary Fray just wishes that her life would go back to normal. But what’s normal when you’re a demon-slaying Shadowhunter, your mother is in a magically induced coma, and you can suddenly see Downworlders like werewolves, vampires, and faeries? If Clary left the world of the Shadowhunters behind, it would mean more time with her best friend, Simon, who’s becoming more than a friend. But the Shadowhunting world isn’t ready to let her go—especially her handsome, infuriating, newfound brother, Jace. And Clary’s only chance to help her mother is to track down rogue Shadowhunter Valentine, who is probably insane, certainly evil—and also her father.

“To complicate matters, someone in New York City is murdering Downworlder children. Is Valentine behind the killings—and if he is, what is he trying to do? When the second of the Mortal Instruments, the Soul-Sword, is stolen, the terrifying Inquisitor arrives to investigate and zooms right in on Jace. How can Clary stop Valentine if Jace is willing to betray everything he believes in to help their father?

“In this breathtaking sequel to City of Bones, Cassandra Clare lures her readers back into the dark grip of New York City’s Downworld, where love is never safe and power becomes the deadliest temptation.”

In these first three books of The Mortal Instruments, we’re basically following Cassandra Clare’s charming villain Valentine Morgenstern as he seeks to collect all three of these legendary objects. In City of Bones Clary et al. (I’ve been reading too many journal articles) try to stop Valentine from getting the Mortal Cup. In City of Ashes, it’s the Soul-Sword. (The last will be the mirror.) As Amazon’s summary explains, someone is murdering Downworlder children, and although Clary and her friends are pretty convinced it’s Valentine, some of the adult Shadowhunters are less certain. I’ll be honest, I wasn’t too thrilled at first with the whole Downworlder murder mystery thing. I just feel this type of plotline is starting to get played out. I personally don’t read a lot of murder mysteries, and now it seems like this type of plotline is leaking into a lot of fantasy books. I’ve loved this combination in other series (Karen Marie Moning’s Fever series starts out that way), but then I noticed True Blood’s first season started out that way (I haven’t gotten around to reading the Sookie Stackhouse books yet)…and now this book. But when I actually saw where she was going with it, I got over it and liked it. It wasn’t so much of a traditional murder mystery as a question of who the murderer was: The person it obviously was versus who the Inquisitor is trying to pin it on. It reminded me of in Harry Potter when everyone accused Harry of lying about Voldemort being back.

At the end of the first book, Clary and Jace have found out that Valentine is their father -and that they’re brother and sister -so one of the major themes in CoA is how they are handling this revelation in different ways and how it impacts their decisions. Clary pretty much wants nothing to do with Valentine, but then again, she wasn’t raised by Valentine. Sinisterly charming, evil Valentine is the only Valentine she knows, so it makes it easier for her to hate him. Jace, on the other hand, was raised by Valentine -and even though he had a troubled childhood, Valentine was the only father figure he knew until the Lightwoods took him in. He feels more beholden to Valentine than Clary does.

This leads me to another criticism of the book -and I really don’t want to sound like I didn’t like it. I actually really enjoyed Ashes, just as much as Bones. I like Cassandra Clare’s writing style, and she really pulls you into this underbelly of New York City she’s created. I love the action, I love the tension, her sense of humor, the teenage angst, and the suspense. She definitely leaves the reader wanting more. But I have to say…I find Valentine to be lacking sometimes. He’s a pretty traditional evil villain, that’s fine, we don’t have to go psycho-analyzing him. But the narration talks a lot about how utterly manipulative Valentine is, but we’re not shown this very often, or at least not in a very sophisticated way. I just think it could have been done better. Just sayin. I don’t know how anyone else feels about this, so feel free to argue with me, lol. Also, he and Jace seem to have these long, drawn “philosophical” discussions that really aren’t as substantial as they could be. Then again, I found Jace’s inner struggle to be very palpable. You can tell at times he comes close to siding with Valentine.

And now, onto Clary and Jace. Okay, you may not want to read this part if you haven’t read the books. I was trying to keep this spoiler free, but this paragraph is definitely going to hint at things to come. I was really frustrated at the end of Bones when it came out that Jace and Clary were brother and sister. In Ashes you start to get the feeling that…well, this may not be the case, but it’s still kind of a gray area. Anyway, my point is that at least noticing these hints sprinkled in, and the fact that I may have looked up some spoilers online, made me a lot more comfortable about shipping Jace/Clary. I like to think I shipped them because I saw what comes up later in City of Glass. It was either that, or she was really going to go all Flowers in the Attic on us. But then again, when Jace says things like “Does this feel wrong to you?” to Clary, I’m like uh that’s kinda hot. (I don’t remember what the exact quote was, but I think it was something like that. Now I can’t even find it in the book. Maybe it’s all in my head?…) I liked what Ms. Clare did with the Seelie Queen/Court scene…no one does Seelie quite like Karen Marie Moning, but it was satisfactory. 😉

Spoilers over…now. You may read on.

Last but not least, we have more (but it’s never enough, really) of the funny, glittery Magnus Bane. Seriously, I think she depicts his character the best – he really pops off the page. He has a strange sense of humor; it’s a little bit dry, and even when he’s kinda being an ass, he still cracks me up: “I’d say it’s been nice meeting you all, but, in fact, it hasn’t. It’s been quite awkward, and frankly, the next time I see a single one of you will be far too soon.” 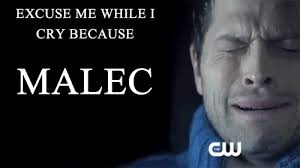 And he and Alec, although they have their issues they need to sort through, are just too adorbs. I feel super bad for Magnus, though, when it’s clear Alec still has unresolved feelings for Jace.

Now, since I didn’t post a music video on Monday, I decided to find one to “go” with The Mortal Instruments. Okay, Robbie Williams singing about “Angels” really isn’t a demon-slaying theme song, but it was the first thing that popped into my head. And who doesn’t love a little 90s? (Or early 2000s? I can’t really remember when this song came out…)

Other Reviews and Related Reads:

Book of the Week: City of Bones – The Urge to Write

Curious Case of the Confused

Bri Has Too Many Books