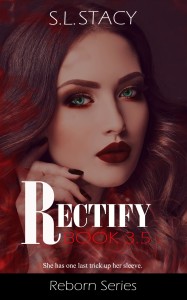 Rectify, a new novella in the Reborn series, is now live!

Find it on Amazon, Barnes & Noble, Smashwords, and more!

Add it on Goodreads.

But when Thurston University student Siobhan Elliot goes missing and the human cops start sniffing around, Apate’s dubious past catches up with her. Now it’s only a matter of time until Jimmy, her latest conquest—who also happens to be Siobhan’s ex—finds out it’s her fault. To cover her tracks, Apate pays a visit to the Elliots, using her powers of illusion to pose as their daughter and convince them everything’s fine. Lying is easy. Confronting the consequences of her actions, however, will prove to be much harder than Apate expected.

To find her redemption, Apate knows it’s time to come clean. But the truth could cost her the only love she’s ever known.