So, I know the Lady Gaga concert is tonight (oh wait, or maybe it’s the Super Bowl, or something), but I wanted to let you all know that you can now pre-order Reclaim (Reborn Series Book 3)! It’s available through Kindle, Smashwords, Nook, and many other platforms. Pre-order it now, and it will be delivered to your e-reader on February 15, 2017.

Revenge, a Reborn series novella that takes place between books 2 and 3, is also available for purchase! (To be honest, you don’t have to read it to understand what’s going on in Reclaim, although there is a neat tie-in between the two installments.)

The paperback version of Reclaim will also be available on February 15. 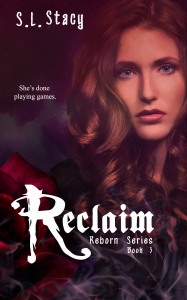 Carly just lost the last week of her life trapped in Pandora, the space between universes. Most of it was spent navigating an illusion created by her only companion, Dolos, the god of trickery. Even so, the time Carly spent there changed her. She fell in love. She’s more fearless and more determined than ever to leave the darkest parts of her past behind. And she’s learned that, sometimes, family is the one you make for yourself, like the one she’s found at Gamma Lambda Phi.

But a lot can happen in one week, and Carly returns to a sorority in jeopardy. A curse has been placed on her sisters, and it’s up to her to break it. With the Gammas out of commission, Eric’s halfling army is plotting something big, and Carly and her sisters are the only ones who can stop them. To make matters worse, Dolos is working for the bad guys and up to his old tricks.

Time is running out, but the antidote for the curse is proving impossible to find. To save her sisters and stop Eric’s army, Carly has some tough choices to make. But will she choose duty and sisterhood, or the kind of passion that comes around only once in a lifetime?

One thought on “Pre-Order for Reclaim”