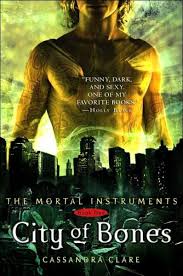 2 thoughts on “Book of the Week: City of Bones (The Mortal Instruments Book 1)”