I realized I haven’t composed nearly enough Top 10 lists on The Urge to Write. So what better time to write one than during the Scandal commercial breaks? (It’s arguably more productive than what I did during the commercials of Sunday’s Once Upon A Time, which was to watch the prior week’s episode on my lap top…..) And what could be better than a list of the Top 10 Bromances?

According to Wikipedia. a bromance is a close, non-sexual relationship between at least two men, a form of affectional intimacy. 😉

Women are usually thought of as forming closer bonds than men, but as the following duos show, fictional men, at least, can enjoy powerful, nearly unbreakable bonds with one another (although the occasional girl may come between them, as you will see). My list of the Top 10 Bromances spans decades and includes characters from my all-time favorite books, TV shows and movies of a variety of genres (fantasy, sci-fi, comedy, “dramedy”). And one non-fictional pair, as you will see…

Be sure to share your favorite bromances in the comments!

This bromance is worth a mention since I recently devoured Karen Moning’s The Immortal Highlander. I enjoyed this back story bromance between the mischievous Adam Black (Puck being one of his many other aliases) and Council Elder Darroc. I loved this idea of two reckless Fae princes conquering Fairy and Earth together:

“Watching Adam with his little human had reminded him [Darroc] of the times long ago when they’d ridden the Wild Hunt together, when they’d hunted like brother-gods, invincible and free, ruled by nothing and no one…Mortals had been nothing more to them than lowly beasts, good for a chase, amusing to play with…”

Unfortunately, by the time the events in the book happen, Adam must stop his now arch-nemesis Darroc from overthrowing Aoibheal and freeing the Unseelie from their icy dark prison. And well, if you’ve read the Fever series, you know how that eventually turns out…

once roommates and bffs. Unfortunately, when this show commenced their friendship had already entered rocky terrain: They’ve joined opposing fraternities, and Evan is dating Cappie’s ex, ZBZ sister Casey. Although I spent most of Greek‘s four seasons waiting for Cappie and Casey to finally get back together (and stay that way), the Evan/Cappie on-again, off-again bromance was another central conflict on the show. Fortunately, by the series finale the two seem to finally make amends, although I’m not sure they could ever truly go back to those early carefree days of freshman year. 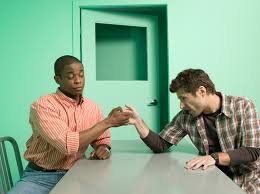 I haven’t talked about my love for Psych much on this blog, but if you haven’t checked it out yet, this show is seriously awesome and hilarious. Shawn and Gus have been best friends since they were kids and despite the fact that they are polar opposites. Shawn is ridiculously perceptive, which serves him well in his job as a “psychic” consultant to the Santa Barbara PD, but he drifts through life rather aimlessly; on the other hand, Gus has a serious job as a pharmaceutical rep and is more focused and level-headed. Nevertheless, these two are the very definition of best friends forever as they solve mysteries and get into all sorts of mischief (courtesy of Shawn).

7. Howard and Raj probably have one of the most special friendships out of the entire gang on The Big Bang Theory. But seriously, beyond al

l of the jokes about their “ersatz homosexual relationship,” in the earliest seasons Howard and Raj are two single nerds banding together in search of comic books and, of course, love. Of course, Howard doesn’t completely reform his  creepster ways until he meets charming microbiologist Bernadette, but I think this also has a positive influence on his friendship with Raj, making it a little less codependent but still solid. 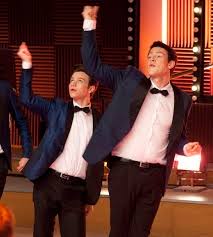 This is the first (but not the last) brother duo on this list -well, step-brother duo. Glee’s Finn and Kurt didn’t start off as allies; due to his reputation as the cute, clean-cut jock at McKinley High, Finn was initially wary of the merging of the Hudson-Hummels and of having a gay friend/step-brother. Kurt wasn’t particularly sensitive to Finn’s feelings, either. But by the end of Season 3, Finn has amassed the courage to stand up for Glee Club, Kurt and their friendship. Glee is one of the few shows (if not the only one) at least in the United States that portrays a friendship between a gay teenage boy and a straight one, period, while also doing so with tact and grace.

“In Glee Club whenever two of us got together we got a nickname. Rachel and I are Finchel. Rachel and Puck were Puckleberry. And today a new union is formed: Furt. You and I, man. We’re brothers from another mother.”

And yet again, I manage to include my two favorite people! In fact, the only reason they’re not higher up on the list is because they’re real people. I know I should have probably kept this f 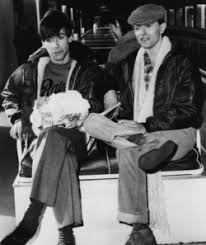 ocused -confined to fictional characters -but I can’t resist. There’s just something epic about picturing these two musicians collaborating together in Berlin -writing songs, performing, and being generally awesome. They’re even making a movie about those creative years in Berlin. (I’m not getting paid to endorse the movie or anything like that, I’m just orgasmically excited about it-so much so that I’m making up words.)

Although many differences exist between The Vampire Diaries TV series and the original L. J. Smith books, one 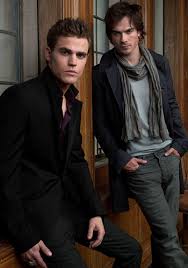 steadfast theme is the bond between Stefan and Damon Salvatore. Sure, they’ve fallen twice fallen for the same girl -the enticing vampire Katherine and later for her doppelgänger Elena. This show is now in its fourth tumultuous season, and it’s becoming harder and harder to see Stefan as just the “good brother” and Damon as the bad guy. Stefan’s relapsed into his dark side, the notorious Ripper, and we’ve seen Damon let his guard down as far as Elena’s concerned as well as caught glimpses of a more selfless Damon. Even through their ups and downs, Stefan and Damon know they can depend on each other and trust the other to keep Elena safe.

(Damon:) “I was hoping we could hang. You know a little brother bonding. I know we don’t actually “hang out”. We team up, we join forces, we activate our Wonder twin powers.” 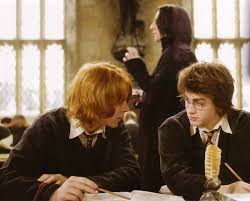 Of course, part of the true magic of J. K. Rowling’s epic series lies in the dynamic of the main trio -Harry, Ron and Hermoine -but since tonight’s focus is on bromances, we will consider Harry/Ron. These two are a team from their start at Hogwart’s School of Witchcraft and Wizardry and remain friends well into adulthood, as is evident in the epilogue of The Deathly Hallows. They follow in the footsteps of James Potter and Sirius Black, getting wrapped up in all sorts of mischief and shenanigans (or rather, the mayhem finds them, Harry being the Chose One and all). Throughout all of their adventures in and out of Hogwarts, Harry and Ron fight for goodness and peace in both the wizard and Muggle worlds.

If this list only contained book bromances, Frodo and Sam would be number one. I mean, come on – 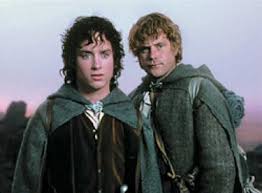 theirs is the quintessential bromance. They leave their cozy shire to go on the ultimate adventure with a company of dwarves, elves and humans. Although they find true friends in their new allies, only Sam can help Frodo overcome his obsession with the One Ring in order to destroy it at the very end. Sam’s loyalty to Frodo is  unwavering. 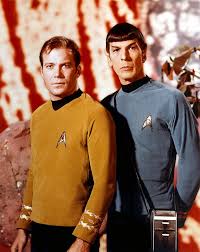 Another classic example of two best friends having epic adventures, only this time exploring space, that final frontier. Although its special effects are quite outdated now, the themes of friendship and the exploration of the unknown (I can’t seem to say what I want to say without it sounding like I’m talking about something else…)  in The Original Series are timeless. Wikipedia tells me that the Kirk/Spock dynamic also inspired a lot of sexy fanfic back in the day and has greatly influenced the development of these communities as we know them today. I am also a fan of J. J. Abram’s reinvention of the franchise (I’ve watched it so many times I’ve lost count), in which we saw Kirk and Spock’s mutual animosity blossom into the bromance we know and love.