“I am sorry about Lord Gaston, m’lady,” Belle’s maid, Constance, says to her later as she is helping Belle out of her wedding dress.

“Thank you, Constance,” Belle replies politely. I am not, she wants to add, but holds her tongue. Belle gingerly steps out of the gown and shimmies into a mauve-colored dress, which is just as pretty and feminine but more comfortable.

“Is Lord Gaston still downstairs?” Belle wonders as Constance is fastening the dress in the back. She had seen him talking to her father before going upstairs to change.

“No, m’lady. He told your father that he is off to pay a visit to that wicked hermit, Rumpelstiltskin.”

Belle freezes. “What?” she whispers. She recovers herself quickly and pulls away from Constance. “I need out of this dress. Now,” she commands with uncharacteristic harshness. “I want to put on my riding clothes.”

Constance’s sky blue eyes look surprised, but she nods and goes to Belle’s closet. “As you wish, m’lady.”

In mere minutes, Belle has changed clothes for the third time. She pulls a blue cape around her shoulders and runs downstairs to 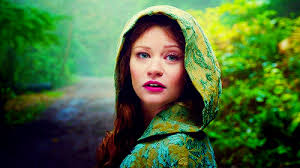 the stables, rushing past her father even as he’s saying her name. “Not now, Papa!” she calls over her shoulder. At the stables, she readies Chestnut and launches herself into the leather saddle, adjusting the reins in her milk white hands.

“Where’re you going in such a hurry, Miss Belle?” the stable boy asks her in a panicked voice, still watching her, dumbfounded, from the corner of the stall.

“It is no concern of yours, Brandon,” she tells him. She hates being brusque with sweet, reliable Brandon, but she’s on a mission. She has to get to Rumpelstiltskin’s before…before something terrible happens. Belle isn’t sure who she’s more afraid for: Rumpel or Gaston. Her hands are sweaty on the reins and her heart pounds so loudly in her chest she wonders if Brandon can hear it. Taking a deep breath, she murmurs “Good girl, Chestnut,” before jerking the reins and sending Chestnut charging onto the path through the Dark Forest.

The chilly mid-morning air whips at her face, but Belle urges Chestnut on, determination surging through her body, through her hands and fingers, to the powerful legs of her beautiful brown horse. She abruptly skids Chestnut to a halt when they reach Rumpelstiltskin’s house. The house seems quiet and dark. After gracefully dismounting Chestnut, Belle tethers her to one of the wooden fence posts. She removes the hood of her cloak and approaches the front door with some trepidation. Even though she knows she must stop Gaston, the last time she was here Rumpel told her that he did not love her as she had assumed – he had called her a “warm body.” He does not want you here, whispers Doubt in the back of her mind. He does not love you. Why even bother? Go home and forget about him. But most of her doesn’t really believe that Rumpel was using her, and it is this that propels her forward.

Belle turns the knob and pushes on the front door. It opens with a loud creak, making her jump back. She waits a few moments, but doesn’t hear any answering noises, so she tiptoes inside and gently closes the door behind her. As always, the house is vast and magnificent, more like a museum than a place to call home. And quiet. So quiet.

“Hello?” Belle shouts, her voice sounding even louder than she had intended against the eerie silence. She removes her cloak and tosses it on one of the burgundy chairs. Quick exploration of the first floor confirms that there’s no one there, so she ascends the grand staircase, not caring anymore if her black riding boots cause the stairs to creak.

“Hello? Rumpel?” she calls, but there’s no answer. Am I too late? she wonders, her brow creasing with concern. Belle checks all of the rooms, but there’s no Rumpel, no Gaston. Maybe Constance was wrong. Maybe Gaston simply went home to sulk, and Rumpel was out being his mischievous self, making deals and doing magic…

That’s when she hears the strangled cry. Belle starts at the sound of it and rushes back to the room she’s just inspected, the master bedroom. It’s still empty, of course. The cry was unmistakably her Rumpel, but where had it come from? Then, she hears another, deeper voice shouting, and she realizes it’s drifting in from outside through the open window.

They’re on the roof.

Prying open the window the rest of the way, Belle crawls out onto the flat part of the roof. Now she can hear the scraping of boots against the shingles, and Gaston bellowing, “You stay away from her, you hear me? You worthless, undeserving little –”

“Rumpel!” It comes out as a terrified shriek when Belle sees them at the edge of the roof. Rumpel is scrambling to keep his

footing, and Gaston has his sword poised underneath Rumpel’s chin. “Gaston, let him go! Please!”

“Stay out of this, Belle!” Gaston growls at her, his stance unwavering. “This coward is not the man for you! He is barely a man!”

“Gaston, please!” Belle knows how ridiculous she sounds, how pathetic and desperate, but, with no weapon or magic of her own, she doesn’t know what else to do except to beg Gaston to stop. “Please let him go. I love him,” she sobs, unable to hold back the tears that have started to pour down her face. Through the haze of her tears, she sees Rumpelstiltskin looking at her now instead of at his attacker, but she can’t read his expression. “I love him.”

Gaston glances back at her, seeming to hesitate. Finally, Belle relaxes as she watches Gaston withdraw his sword and return it to its sheath. “I hope to God you know what you are doing, Belle –”

Belle is looking at Gaston, listening to his fervent pleas, so only out of the corner of her eye does she see something skitter along the rooftop and into Rumpel’s eager, outstretched hand, which clutches the object and raises it behind Gaston –

“Rumpel, no!” Belle now implores her love, but it’s too late; Gaston staggers forward, Rumpelstiltskin’s dagger sticking out of his back. He collapses, his forehead smacking against the roof, blood gushing from the wound. Belle kneels down beside him and cradles his head in her arms, but his eyes are closed and he has stopped breathing. Whether it was only from the injury itself, the magic within the dagger or a combination of both, Belle isn’t sure, but Gaston is already dead.

For a moment, Belle cannot find words. Although impulsive and even sometimes aggressive, Gaston was a good man, a  man she would have gladly married if she hadn’t already found her one, true love.

To her surprise, her cheeks are dry now, and she can’t cry anymore. Belle shakes her head slowly. “What have you done, Rumpel?” Her voice is small but filled with despair and exasperation. She looks up at him. Although he would never rival Gaston in breadth and height in life, Rumpelstiltskin seems to tower over Gaston’s lifeless body. He cocks his head to one side, appearing more confused than repentant.

“He was trying to come between us, my love,” Rumpel tells her as though it should be the most obvious thing in the world to her. “He was trying to kill me. I was defending myself. Us,” he insists, taking a step toward her. Belle automatically shrinks away from his proffered hand.

“He was just threatening you!” she yells, throwing all of the anger and hurt building up inside of her into her words. “He had put his sword away, was about to leave us alone! He could not defend himself. And anyway, he would not have actually killed you, he was not a –” Belle clamps her mouth shut so that she doesn’t blurt the word she’s thinking of. Rumpel’s face falls and he drops his hand.

“A what, Belle?” he hisses. Belle flinches as he yanks the dagger from Gaston’s back. It drips blood onto Gaston’s midnight blue coat, forming little purple blotches. “Gaston was not a what?”

“A monster!” she finishes reluctantly, not meeting his gaze.

“What, like me?” Rumpel spits at her. Then, he emits one of his strangled, high-pitched cackles. Belle usually finds his laugh

endearing, but right now it sends chills up her spine. “I am a monster, love. A beast, if you will. You never really understood that, did you, that you were in love with a beast?” He walks around Gaston and bends down so that they’re face-to-face. Belle is forced to look him in the eye, now, and she sees that the man she thought she had brought back to life through their lovemaking and heartfelt talks in the library is gone. His eyes shine only with hatred.

“I’m going now,” Belle whispers, standing up and walking deliberately back to the open window. Without looking back at him, she adds, “I did love you, you know. And I know you loved me, too.” She pauses for Rumpelstiltskin’s response, but when he doesn’t speak she ducks back through the window. As soon as Belle’s feet hit the floor, she breaks out into a run and doesn’t stop until she reaches Chestnut. She realizes she has forgotten her cloak, but untethers and mounts Chestnut anyway, goading the horse back into the Dark Forest, never looking back.