I actually read The Immortal Highlander (Book 6 of Karen Marie Moning’s Highlander series) a few months ago, but I never got around to reviewing it (a.k.a. going on an obsessed, fangirl rant), so it is this week’s book. You may remember that Adam Black and Darroc made my list of the Top 10 Bromances awhile back. But this post is dedicated to the entire book -every delicious page.

Summary: “BEWARE: lethally seductive alpha male of immense strength and dark eroticism, do not look at him. Do not touch him. Do not be tempted. Do not be seduced. 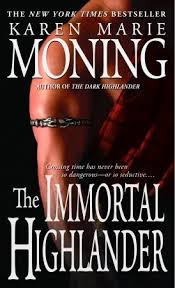 “With his long, black hair and dark, mesmerizing eyes, Adam Black is Trouble with a capital T. Immortal, arrogant, and intensely sensual, he is the consummate seducer, free to roam across time and continents in pursuit of his insatiable desires. That is, until a curse strips him of his immortality and makes him invisible, a cruel fate for so irresistible a man. With his very life at stake, Adam’s only hope for survival is in the hands of the one woman who can actually see him.

“Enter law student Gabrielle O’Callaghan, who is cursed with the ability to see both worlds: Mortal and Faery. From the moment she lays eyes on this stunning male, Gabby is certain of one thing: He could be her undoing. Thus begins a long, dangerous seduction. Because despite his powerful strength and unquenchable hungers, Adam refuses to take a woman by force. Instead, he will tease his way into Gabby’s bed and make her want him just as he wants her.

“Now, no matter how hard Gabby tries to avoid him, Adam is everywhere, invisible to all but her—perched atop her office cubicle in too-tight jeans, whispering softly from behind the stacks of the law library, stealing her breath away with his knowing smile…all the while tempting her with the promise of unimaginable pleasure in his arms. But soon danger will intrude on this sensual dance. For as Adam’s quest to regain his immortality plunges them into a world of timeless magic and the deadly politics of the Faery queen’s court, the price of surrender could be their very lives. Unless they can thwart the conspiracy that threatens both mortal and Faery realms…and give them a shot at a destiny few mortals ever know: glorious, wondrous, endless love.”

Before reading Immortal, I did read The Spell of the Highlander. (Yes, it’s Book 7. Yes, I’m reading them in reverse order. More about that later.) But I didn’t post anything about Spell because, although I enjoyed it and it still showcased Moning’s talent for expertly combining elements of romance, fantasy and mythology, it wasn’t my favorite of her books.

Immortal is a different story. (Pun intended?) It has the traditional formula of a romance novel, of course, but it lays the framework for her Fever series, which means it’s a little bit dark and full of meddling Fae. I was really disappointed when I read Spell and the Fae only cropped up a few times. Immortal was exactly what I was craving. In this case, our Highlander is actually a Fae trapped in his Highlander glamour when Queen Aoibheal punishes him by taking away his immortality. Gabby is a sidhe-seer and is the only one who can see Adam. She tries to resist him, but Adam Black is persistent in getting Gabby to help him so that he can return to his immortal form -and in getting Gabby for himself. Their dynamic is so entertaining, full of that typical love-hate tension, but the way Moning develops it, it feels fresh and exciting.

And in the background, we have Darroc trying to get Adam Black and his little sidhe-seer out of the way so that he can blinde-side Aoibheal and free the Unseelie from their prison. It was so much fun reading about Darroc as a Fae and the threads of what later transformed into Moning’s much beloved Fever series. I guess one could call it a prequel. I just love how Moning’s Fae are these majestic, epic characters operating in the background, tinkering (and sometimes more than tinkering) with the order of things on Earth, unbeknownst to humans. I don’t know why, I’m just obsessed with the idea, and I love how Moning incorporates it.

There’s an unexpected twist towards the end of Immortal, and also a few pages that made me really scared and nervous for the ending, even though it’s formula fiction and we know how it has to end. But still, it scared me. Not only does Moning nicely wrap things up, at the end there’s a scene that will just make you “awwwww.” Ugh, again, so perfect. I want to be able to write like her…

Beyond the fantasy and sexual tension, there’s a nice touch of “reality” in it, so to speak, because Gabby’s dealings with and feelings for Adam go against what she was taught as a young girl -go against everything she’s read about Adam in her family’s books. Namely, that her fantasies about a sexy Fae prince are wrong -that the Fae are to be avoided, and Adam Black is especially to be avoided. This element actually makes what is definitely a fantastical book feel a little more down-to-Earth. We have a young woman who is learning firsthand the truth about a person she was taught to fear. Sure, some of what her family said about the Fae is true, but there’s much more too it than that, and some of it stemmed from their own prejudice.

So, what did I not enjoy about this book? That would be nothing. Seriously, nothing. It was epic, and it made me want to read the Fever series again. Which needs to happen this summer. After I get done reading all of the other books on my summer reading list…

As a last note, although the Highlander books aren’t as connected as the Fever series -each book is distinct and focuses on a different couple -characters from past books do show up in the later books, mostly brothers Drustan and Dageus. I read Spell and Immortal first because they were available at the library, and she gives you enough background information that you don’t get confused when she brings in these old characters. So I personally don’t think it’s super necessary to read them in order; however, this would probably bother many of you, so of course go ahead and read them as they were meant to be read. 😉 My OCD did kick in and I realized I should read them in some order, so it looks like that will be reverse order. No, really, I have The Dark Highlander (Book 5) sitting on my bookshelf, waiting to be read…

Upcoming Books of the Week (in no particular order): The Dark Highlander, The Gathering (Kelley Armstrong), City of Bones (Cassandra Clare)

The Urge to Write: Isn’t it Bromantic?

The Urge to Write: Sunday Showdown: Fever versus Iced

The Readist: On Saying Goodbye to Your Favorite Characters

3 thoughts on “Book of the Week: The Immortal Highlander”